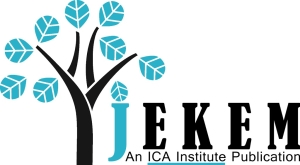 The interdisciplinary Journal of Emerging Knowledge on Emerging Markets has published its 3rd volume. The journal is the official scholarly publication of the India China America Institute, a thought leader focusing on relations between the U.S. and the world’s largest emerging economies housed at Kennesaw State University’s Coles College of Business.
This edition, consisting of 581 pages, contains works by scholars from universities in the U.S., Germany, India, China, Japan, South Korea, the Netherlands and Tunisia.

“The problems and issues that the articles in this volume deal often do not educe simple answers or binary logic but elicit the creative tensions that come from scholarship,” says Ashok Roy, Ph.D., assistant vice president for financial services and associate professor of Asian studies at Kennesaw State, and editor-in-chief of the Journal of Emerging Knowledge on Emerging Markets. “These articles are a fast-paced tour de force through an intriguing spectrum of topics in various academic disciplines. The articles are meant to entice readers intellectually.”

The third edition of the journal, which became available online on Oct. 17, contains thought-provoking articles on a wide variety of topics. The journal’s content appears in searches of the most popular and prestigious academic databases, including Digital Commons, Google Scholar, EBSCO and the Directory of Open Access Journals.
Journal highlights include:
To view the third edition of the Journal of Emerging Knowledge on Emerging Markets, please visit
http://digitalcommons.kennesaw.edu/jekem/
The India China America Institute is a well-respected thought leader on economic and geopolitical issues involving the United States and the world’s largest emerging economies –– India and China. The nonprofit institute’s primary focus is on the relationships between and among the new triad of power consisting of the U.S., China and India, the world’s most populous countries and largest markets. These three mammoth economies are expected to lead global economic growth in the 21st century and their interrelationships will bear on global prosperity.
Kennesaw State University is the third-largest university in Georgia, offering 80 graduate and undergraduate degrees, including doctorates in education, business and nursing and a new Ph.D. in international conflict management. A member of the 35-unit University System of Georgia, Kennesaw State is a comprehensive, residential institution with a growing student population of more than 24,100 from 142 countries.
By Roxanne Russell|2017-09-28T16:34:20-04:00October 19, 2011|Uncategorized|Comments Off on Vol. 3 JEKEM Publication Notice

About the Author: Roxanne Russell

Instructional Technology and Design consultant and Teacher with 20+ years of teaching, management and design experience in face-to-face and online classrooms.